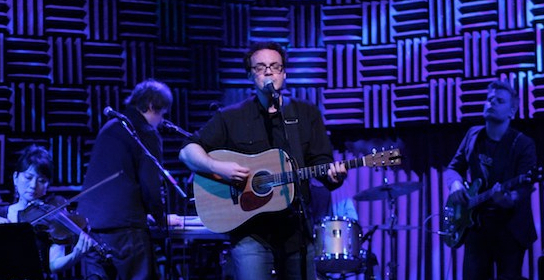 The Holiday Show is a highlight in a year that has been filled with them: I’ve been so grateful to play for you, live, on TV and in theaters. And this year I became a dad to a beautiful baby girl, Catherine. She gets the hiccups now and then, and seems to tolerate me hovering over her bassinet. It’s been outrageous.

2013 will feature some major new work that I am very excited to share with you. But let’s not get ahead of ourselves…

In keeping with a long-standing Holiday Show tradition, I’ll distribute gifts, known as “Holiday Omens.” (What are Holiday Omens? CLICK HERE.) Recipients will be invited to interpret the Omen’s personal significance in the coming year. Hilarious, poignant or cautionary, they have proven to be alarmingly accurate.

Let’s have a party. I’m looking forward to seeing you there. – M

Teaching Songwriting at Yale University, Spring Semester 2013
Break out the threadbare cardigan sweaters: I will be teaching a seminar at Yale University entitled “The Art and Business of Songwriting.” Course description: “Music sits at the forefront of creative and technological revolutions, and songwriting remains the fundamental form of its expression. This seminar will focus on establishing a personal songwriting voice, and then explore a song’s application within the fundamentally shifting industries of film, TV and the Web via crowd sourcing, collaboration and copyright.” Sounds good, right?

Pink Floyd’s Roger Waters Talks Steak au Poivre, Geopolitics | “On The Table”
You’ll know the soundtrack to this episode: “Grace,” “Everybody Knows,” “Packing My Bags,” “Next Time,” “Skimming”… it would be an excellent, and effective, drinking game. Just saying.

Bandcamp Exclusive: “1000 Miles (Extended Version)”
An unreleased, extended version of “1000 Miles” from 2011’s Wander Away sessions, available only on Bandcamp.

The Mike Errico Podcast, Episode 9: The Tiara Story (Free)
A wand-wielding lady of the bowling lanes composes a victory dance for the ages. (Recorded live at Rockwood Music Hall, NYC, 12/21/11.)