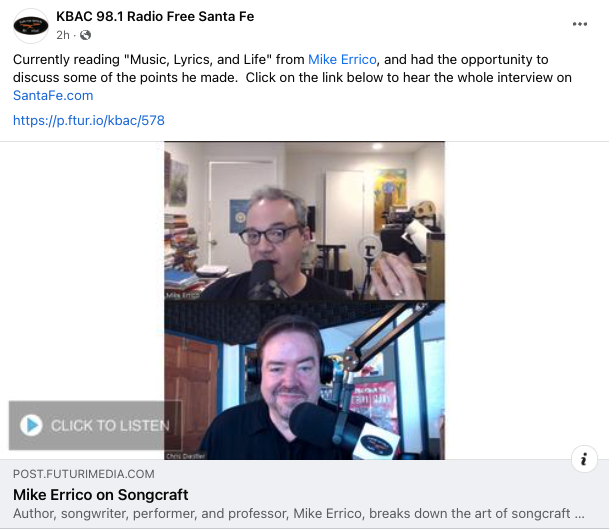 Thanks to Chris Diestler and KBAC for checking out Music, Lyrics, and Life and asking some seriously thoughtful and intriguing questions.

We had so much fun, they asked a follow-up:

One of the questions I didn’t get to because we were already running long on time was this (and it would have been kind of an offshoot of another question): have you noticed that young writers today have a tendency to ignore things that were always part of songwriting, like choruses, like bridges, and it’s just verse after verse after verse, and the “song” only last about 2 minutes.  Do you think this is an evolution of pop songcraft which may have spooled out of infinitesimal attention spans, or is it a genuine mutation of “contemporary” songcraft?  Like, when prose overtook poetry a hundred years ago?

Right? Not your average program director by any means. I did my best:

Hey, Chris – The two minute song thing, I think is from a series of pressures placed on the song in the market, but also is a reflection of getting to “only the good stuff,” which is cyclical.

Market-wise, TikTok dictates that you jump out of the gate with the chorus, and hope someone puts it under a video of a backyard ATV crash or UFO sighting or other viral image. Also, a killer song that is also short has some advantages at radio (I probably don’t need to tell you that one…) A great four minute song vs a great 2:45 song…well, there’s a natural bias against the longer song.
Also, as I put in the book, “Your song is so short!” can be seen as a compliment—they want to hear more of it, or hear it again. “Your song is so long!” is almost NEVER a compliment—your song is interminable, filled with digressions, laden down with guitar solos…indulgent! Lazy! etc.
The lack of bridges is interesting—we talk about that a lot. The cynical types don’t bother because, frankly, it only happens once, so it’s probably not going to stick in the brain the way a repeated chorus would. In the big publishing mills, writers don’t submit songs with bridges because the chorus is the important part, and if the chorus doesn’t get a greenlight, then the bridge was just wasted time. And there’s that word again – time – because without a bridge, the song is shorter…and we’re back to the beginning of this question again.
The good news is that some students/writers decide that radio is not where the music is going to live anyway, so they begin giving MUCH longer songs that are clearly intended for a different kind of audience (clubs, video games, chill rooms, DJ sets…).
So songs are getting shorter, AND longer. Even the big stars – Taylor Swift, Dylan, Kanye, etc. – drop long songs on their albums to satisfy that different kind of listen.
It’s all really interesting to watch.
Thanks again for the great conversation, and if you post it, please let me know so I can share!
M
PS: Here it is…

Music, Lyrics, and Life signed copies are HERE FOR YOU.