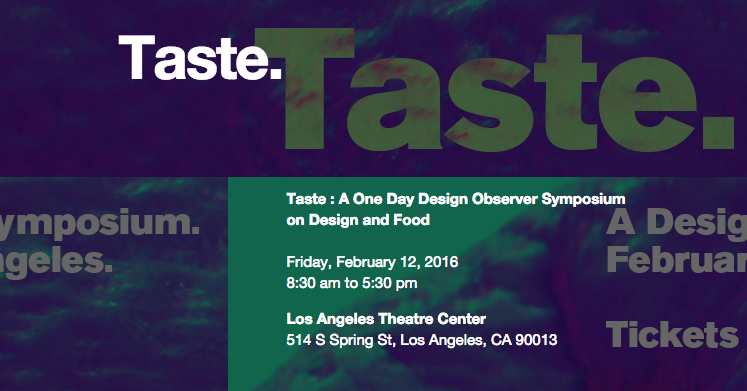 Los Angeles: I’ll be speaking (and playing) about food, design, and music alongside foodies from KCRW, Gizmodo, and the Union of Concerned Scientists, as well as Mark Bittman, Jessica Helfand, Michael Beirut, and many more. There will be food. There will be thought. I got pesto sauce in my bag. ‪#‎swag‬

Agrarian economics. Dry farming. Engineered waste. Vaporized nutrition. How are any of these things a function of design? On the other hand: how could they be anything else? On February 12, 2016, Design Observer will host a symposium on the relationship between design and food. Held in the Los Angeles Theater Center, Taste will feature speakers from across the United States and Europe: we’ll hear from a historian who has traced the origins of artificial flavor; an engineer who has discovered how to nebulize nutrients; and a politician lobbying for national food security. We’ll look at marketing tactics and distribution platforms; climate change and culinary excess; new economies of scale, old expressions of culture—and everything in between. We’ll eat, drink, and be merry, while raising critical questions about where the future of food is headed.