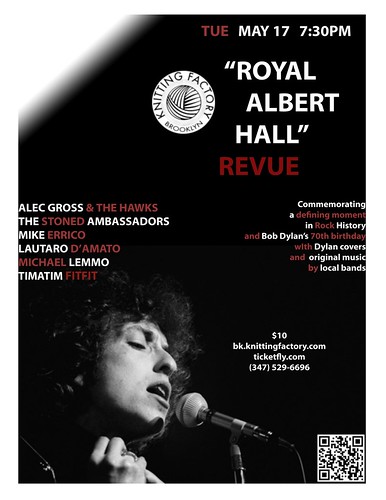 I’ll be celebrating by playing two Dylan covers (along with my own songs) this Tuesday night at the Knitting Factory, 361 Metropolitan Ave, Brooklyn (Click on TOUR for more info) The Story:
Bob Dylan’s 1966 concert at Royal Albert Hall is one of the most legendary shows in Rock & Roll history. Dylan played the first set with just an acoustic guitar, and the second set with a full band and electric guitar. He drowned out all the boos from the crowd with his new, loud sound. Rock was never the same.

Come celebrate this incredible concert and Dylan’s 70th birthday at the Knitting Factory with local musicians doing sets of Dylan covers and original songs. The first half of the evening will be all solo acoustic acts, and the second half will be full bands playing as loud as our sound system will allow.

Wander Away is out now. Signed copies are at errico.com