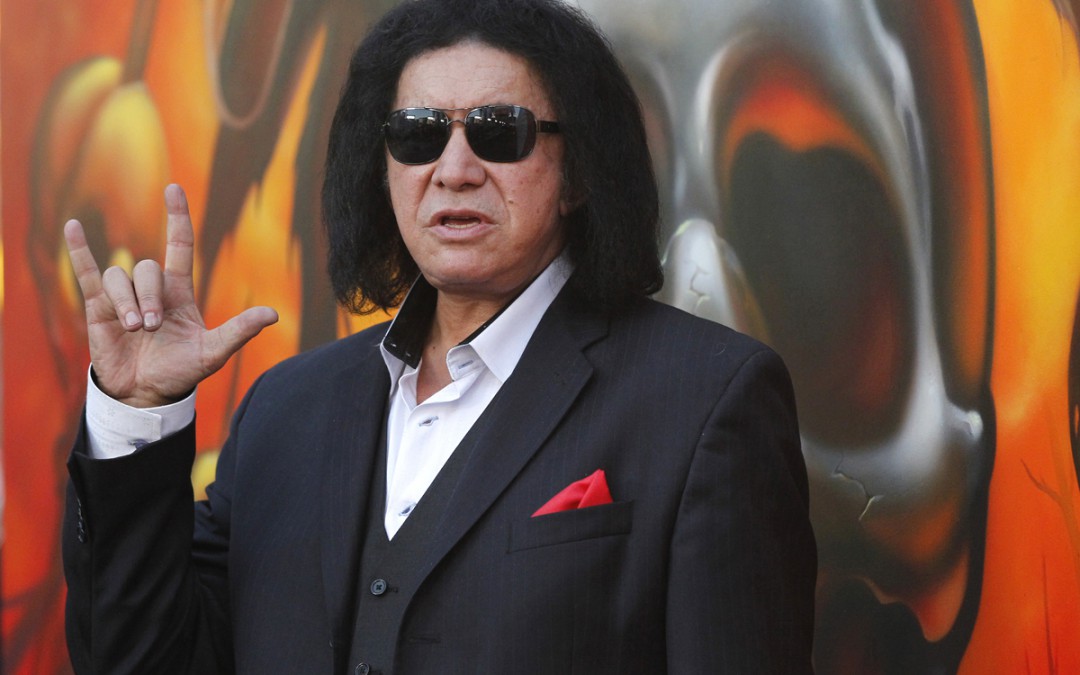 The fire-breathing Kiss bassist and entrepreneur gives us valuable life lessons and a peek at the Family Jewels.

So, tell us a secret: How did you get Shannon Tweed to not marry you but still stay around?
Guys have become such wimps, it just shocks me. My God, what happened to the alpha male? If you wanna marry her, say, “OK, I wanna marry, but let’s talk about if we get divorced,” because statistics say you will. So you must ask her the most important question, which is: If you want money, let me know how much. Let me make an educated decision.

You’ve said, “Women are great housekeepers: They get to keep the house.”
Well, every hotel you’ve all been to is by definition a cohabitation agreement. You sign on the dotted line, and you agree to abide by the rules of the owner of the hotel. When you leave the hotel, you don’t take half the hotel with you.

But by now you must have reached the point …
You’re about to ask, “Well, surely by now you must be married.” At the outset, you have something called a cohabitation agreement that supersedes and nullifies all laws of the land, including common law. Two people have individual counsel, and they both decide the rules of the relationship. And if, in the rules, it says, “If we separate, you don’t get a penny,” those are the rules.

Do people come up to you randomly and remind you that you’ve slept with them?
Oh, often. I’ve had thousands, I mean thousands, of not the sleeping kind but the merging kind, and they’re all wonderful, and I’ll never say anything bad about the ladies who’ve given me the pleasure of spending time with them. And you’re talking about thousands of ladies, because every single one was treated like a lady. Period. I think women get upset if you lie to them or if you mistreat them, none of which goes on in the house of Gene Simmons.

There are no suits or allegations or anything?
There was a recent suit that was made public by a girlfriend I had 35 years ago, not suing me, but suing VH-1 for depicting her in a certain way. And she retracted it. She said, “You’re right, Gene never said anything bad about me.” I never would.

And yet there are married couples and the home porn videos mysteriously surface…
Well, that’s because they never tell each other the truth. You know, you get married to Dr. Jekyll and never meet Mr. Hyde until after the wedding. Why is it a surprise to any woman who married a man that he’s attracted to women? You get married to the woman you love, and you’re walking down the aisle, and they’re throwing rice over your head, and it’s the happiest day, and over to your right is a beautiful girl with double Ds. You’re gonna want to mount her. By the way, it’s nothing personal to the man’s beloved. He loves her, but he does want to mount that one in the corner, and she knows that. That’s why women visit doctors.

Have any of your exes ever come back to haunt you?
Well, no. First of all, I worship and adore Shannon, as I continue to, to this day. She’s a hot pistol and isn’t shy and doesn’t torture me the way the rest of the women out there torture their guys. Women just don’t understand, especially when they won’t be quiet and continue to step in front of the TV set when he’s watching his favorite ball game instead of making him a sandwich. Go find a gay man and talk to him. Go shopping with him. We think it’s silly, yet when a guy sits and watches a ball game, she goes, “No that’s silly, talk to me instead.” But I don’t remember what your question was. What was it?

Have any of your exes ever come back to haunt you?
The reason you never find out some dark secret about me in those rags that women are addicted to is that there really is nothing to tell. The very first thing I did was show Shannon the photos I’ve taken, thousands of them, before we moved in together. In law that’s called full disclosure, before the fact.

Was that a tough night?
No. It’s better to find out there’s trouble in paradise before you move into it than after. I like to think that I have the dignity and ethics of a prostitute: Before the blow job, I’m going to tell you it’s gonna cost 75 dollars, this is what it is and so on. But women don’t seem to have that integrity. If you ask really serious questions, they won’t answer it.

What’d she think of your taste?
Oh, she thinks a lot of them are unattractive, and, you know, some of them are really beautiful. You know what my taste, and all guys’ taste, is?

What’s that?
The closest woman is very pretty.

On your new show, Family Jewels, another side of you emerges: you as a parent. Do you teach your kids these same philosophies?
The reason the rest of the Hollywood kids go to rehab and get on drugs is because they’re allowed to. Shannon is certainly supermom if not superwoman. She makes really brilliant life decisions. There’s no drugs, there’s no booze, there’s no cigarette smoking, there’s nothing. There’s not even cursing in this household. If we curse, we give five or ten bucks. We’re very square. What we teach Nick and Sophie are the rules of nature. It’s a fascinating study if you just take a moment. I’ve heard talk about the terrible twos — you know, that little 2-year-old brat you can’t control. If it goes over to the dog while it’s eating, and tries to put its hand in the dog bowl, that’s the last time it’ll ever do that in its life. Even as a grown-up, it will remember that. Now, if the dog knows how to discipline your child, how come a grown-up can’t?

This kind of parenting is not covered on Oprah.
But this is actually the fact of life. I was on a plane, and there was a baby that wouldn’t shut the fuck up, and two parents were helpless. “What do you want? Do you wanna suck on the boob? Do you want cookies? What?” And I turn to my partner, Rich Abramson, and I say, “Watch this,” and I got up, and I was wearing all black, and I stood right in front of the baby, and it shut the fuck up.

You’re like the baby whisperer.
Fear is good discipline, because a baby is trying to figure it out. My kids are extraordinary, well-disciplined and ambitious young people, because you’re not allowed not to be. Whatever happened to the phrase “Wait until your father gets home”? That used to mean something.

When was the last time you spoke to the other members of Kiss?
Well, Paul lives right up the road. We see each other all the time. Ace and Peter are pretty much incommunicado. Peter lives in New Jersey with his third wife. I cautioned him about this marriage thing. He wouldn’t listen. And Ace I only saw at the Rock Honors in Las Vegas about a month and a half ago, when Ace joined a Kiss tribute band made up of Tommy Lee and Rob Zombie. He played in that band, but he is not allowed to wear the makeup anymore.

Looking out at your place in rock history…
I don’t care.

But you did give many huge bands opening slots and their first big breaks.
We liked them. The first bands that went off on tour with us were, oh, Bon Jovi, AC/DC, Rush, Cheap Trick, Judas Priest, Iron Maiden, Scorpions, Mötley Crüe … I mean, I can’t even think of all of them.

Which band would you say you are most proud of offering that honor of opening for you?
AC/DC. That’s my favorite band.

What was it about AC/DC?
I saw the boys play at a small club first in London with Bon Scott, and I’ll never forget. They were starving, there were just 100 people in the club, and the lights went out, and even during the blackout, Angus was still going, doing his little dance step, back and forth. I thought, “Boy, these guys really care,” so I cornered Angus, in Los Angeles after a show, and I said, “Do you wanna go grab a bite?” and he says, “Yeah let’s go, mate.” And when he smiled, I noticed he didn’t have any front teeth. Literally. And I took him to a place called Ben Frank’s, and he literally had beans and franks, and he had to chew on the side of his mouth. I thought to myself, “This poor little guy’s got the heart of a lion,” and I said at the table, “You’re going out on tour with us.” And his eyes were just like, “What?” You know, they thought they were forever gonna be in these little hellholes.

You are, of course, famous for your merchandising, the Kiss Kasket being one of the more famous items.
Well, that’s nothing compared to the Kiss Coffeehouse, which just opened up in Myrtle Beach. That’ll be a new franchise.

What’s the Kiss-coffee connection?
There is none. Kiss just connects with life. When you really think about it, we don’t mean anything. We don’t have a political point of view, we’re not even metaphysical. You can’t put Rush lyrics to our songs. There’s no depth. I don’t want depth. It’s not even about good taste. It just tastes good, is the difference.

Speaking of Rush, would you have anything to say to Geddy Lee?
Well, we took them out on their first tour. I would say, “You’re welcome.”